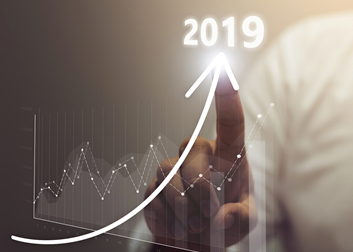 Many blogs and articles agree on the top-trending IT technologies of 2019. Three of the most noticeable ones are:

IoT is rapidly expanding with billions of devices connected to the internet worldwide. By 2020, the number of connected devices is expected to be over 20 billion, with that number increasing to 55 billion by 2025. Many people regularly use these technologies, combined and independent of one another, without realizing the type of technology they are using. The IoT is quickly becoming an integral part of our personal circle as more and more people use a wider variety of technical devices including smart appliances (thermostats, refrigerators, washing machines, etc.) or popular wearable devices such as smartwatches or fitness trackers. It is essential that these devices have a network capable of handling the speed needed for top performance. Therefore, 5G technology will be critical.

5G technology is expected to make a splash in late 2019. It will support devices and services while connecting new industries with “improved performance, efficiency and cost.” Qualcomm, the wireless chip maker, reported that 5G demonstrated download times that are about 20 times faster than current 4G. The increased speed will be most noticeable in streaming and downloading movies. Downloading a movie in 4G may take about six minutes, whereas the same movie will only take 17 seconds with 5G. It also will provide a more capable and unified platform, more capacity and lower latency resulting in users experiencing shorter delay times. It took time for 4G to become widespread and available nationwide. It will likely be the same situation as companies and users transition to 5G.

If the hype about 5G is realistic, it could be the reason why AI tops the watchlist of trends that will continue to grow in 2019. A faster network will vastly improve the AI technologies the average consumer already uses on a daily basis, such as navigation apps and Alexa and Google Assistant devices. The lower latency 5G will be vital in emerging technologies such as self-driving cars.

When considering the combination of billions of devices linked through IoT with the high speed and low latency of 5G along with the progression of AI, it is easy to see why these technologies appear on many 2019 IT trend lists.