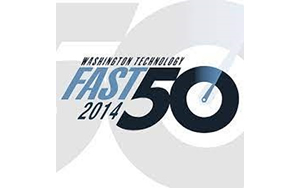 Electrosoft Services, Inc. (Electrosoft) of Reston, VA today announced it has been named to the Washington Technology Fast 50 list.

The Washington Technology Fast 50 is a list of the 50 fastest growing small businesses in the government market ranked by calculating their compound annual growth rate from 2009 to 2013.  This includes prime and subcontracting revenue at the federal, state and local levels. With the 2014 Fast 50 listing, Electrosoft is a two time recipient having made the list previously in 2006.

“It’s an honor to be recognized as one of the Washington Technology Fast 50 companies. We feel fortunate to have experienced rapid growth despite the economy and the constrained federal fiscal climate over the past few years,” said Electrosoft President, Dr.  Sarbari Gupta.  “Our recently formed Board of Advisors is helping us to execute on a strategic path that aggressively promotes company growth while retaining our core values and serving our customers to achieve their mission. We are excited about our prospects for further growth and our ability to serve many more customers in the years ahead.”